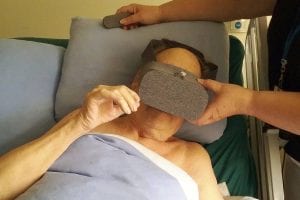 Suzanne Lehbauer, executive director of the Castlegar Hospice Society, started looking into virtual reality (VR) technology last February, after coming up with the idea during a volunteer training session.

“We often talk about what we do for people at end of life and the regrets they have or things that they didn’t have a chance to do, and a lot of times we try and help them, whether it’s bringing pictures into their rooms or bringing plants in if they’re not able to get out into their garden. One year we did an entire Christmas in September for someone,” she says. “And the idea just came into my mind that we would be able to do so much more by utilizing virtual reality.”

Then Lehbauer started doing research on VR technology and looking into funding opportunities.

The Castlegar Hospice was able to secure funding for the program through the Columbia Basin Trust (CBT) Community Initiatives program and also received funding from Telus, allowing Lehbauer to purchase VR equipment in August.

“We’ve started out using the Google Daydream program, which seems to be the best one for what we’re looking for because, of course, we’re not looking for gaming at all. We’re looking more for the experiences. Also, it’s fairly light weight,” says Lehbauer.

Emile Gobat, a hospice client in Talarico Place, was the first to try the Google Daydream.

“He was very excited to go on an African safari through Kenya and it brought back memories of a cruise he had taken with his wife when they went to Africa — different things they had seen — and it was a really, really touching moment,” says Lehbauer.

She will start using VR with other clients, figuring out what does and doesn’t work, and then Lehbauer says she plans to create a toolkit that can be used by other hospice societies.

“We’re hoping to take what we’ve done province-wide if not Canada-wide,” she says.

Lehbauer hopes to share the toolkit at the BC Hospice Palliative Care Association Conference next year, but also hopes to spread word of the program to other hospice societies through social media and news coverage.

So far the Castlegar Hospice’s clients have expressed interest in VR programs that simulate travel and art gallery visits and Lehbauer says that they will be able to use the Google Street View, clients will be able to return to the street where they live.

“If someone is in a facility and they miss their home, we’ll be able to take them back to their street so they can see their house and the street that they lived on,” she explains. 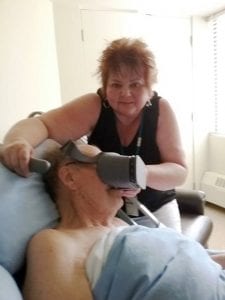 Lehbauer is also looking forward to future developments in VR that will allow hospices to give their clients even better experiences.

“People will be able to be looking at something at the time virtually, which I think will be great for like a husband and wife, or partners or family members. So that’s in the future, so we’re certainly going to stay on top of that,” she says. “And also utilizing drones so that you’re looking at things virtually in real time, which is very cool as well.”

The Castlegar Hospice’s clients are a variety of ages and Lehbauer is excited that the VR program will appeal to clients of all ages.

PLEASE DONATE
Click to Support Your Local Hospice
All funds raised in Castlegar,
stay in Castlegar.

Click to read our plan for a
Hospice Without Borders

Purchase one or more of our Bucket List Trips