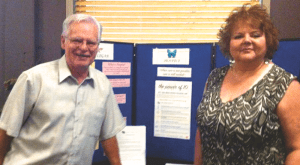 Suzanne Lehbauer and Roger Simmons of the Castlegar Hospice Society spoke to the Regional District of Central Kootenay board last week requesting support for a new 10-bed facility in Castlegar.

Suzanne Lehbauer and Roger Simmons of the Castlegar Hospice Society spoke to the Regional District of Central Kootenay board last week requesting support for a new 10-bed facility in Castlegar.

The Castlegar Hospice Society has pitched the Regional District of Central Kootenay board on their project to build a 10-bed facility for people reaching the end of their life and an alternative to dying in a hospital.

It will cost $3 singulair for allergies.6 million for a facility able to serve approximately 150 patients per year.

“Adding lives to days,” is how the society’s Roger Simmons described their purpose.

From a financial point, Simmons said hospice beds cost $300 per day, far less than $1,000 per day for a hospital bed.

While the current need calls for 20 hospice beds, the 10-bed facility is a model copied from other societies across BC. The size is intended to keep a home-like feel.

The society has a commitment from Castlegar city council in the form of deeded land valued at $241,800.

Simmons said other hospices have succeeded in raising the $400,000 annual operating funds in part due to donations from loved ones or people who wish to see the facility in place for themselves in the future.

Simmons presented numbers demonstrating the need for such a facility. In the Kootenay Boundary more than 500 people die annually from a palliative illness, more than 300 of them in acute care beds in the region’s hospitals.

There are currently two designated hospice beds in Castlegar, Grand Forks, Nelson, Trail and Creston but only on an “if available” basis.

More telling statistics followed: palliative deaths are expected to double in the next 20 years across Canada, 50 to 75 per cent of palliative people need 24-hour care and the average length of stay in a hospice bed is 17 to 22 days.

Rural Creston director Larry Binks said he supports the concept and the idea but recommended talking to people who make the granting decisions “in order to touch the people quicker.” Binks and rural Castlegar director Andy Davidoff asked why this had not yet been brought forward to the regional hospital boards.

“I did not know the cost difference,” Davidoff said, referring to the $700 difference between a hospice and hospital bed. “Why aren’t we dealing with this at our hospital boards?”

In answer to Silverton director Leah Main’s question, Simmons confirmed they have spoken to local groups already providing hospice care and did not see a conflict as they are looking to complement their services.

“I think we can all agree not just on the economics but more appropriate environment,” East Shore director Garry Jackman said, referring to preserving a home-like quality of care.

Rural Nelson director Ramona Faust inquired about the size of the board, and if provincial operating funding is guaranteed.

Executive director Suzanne Lehbauer there are six board members, 71 members and 35 trained hospice volunteers. Simmons referred to the Comox hospice: “[The province] stepped up to the plate once it was built.”

Rural Kaslo director Aimee Watson said she has recently been in discussions with the Kaslo Hospice Society.

“Who is responsible for regulating?” she asked.

Simmons said as they follow other society template “exactly,” they are “not breaking new ground” so there’s nothing new in regulatory terms.

PLEASE DONATE
Click to Support Your Local Hospice
All funds raised in Castlegar,
stay in Castlegar.

Click to read our plan for a
Hospice Without Borders

Purchase one or more of our Bucket List Trips